When a Deadly Canine Cancer Strikes with Little Warning

August 16, 2018 – It took only a few minutes for Bill and Barbara Gorgas to decide to respond to an ad in the paper and adopt two special golden retrievers. The owner of Chase (11 years old) and Clancy (8 years old), a monsignor at a local church, was not in good health. He was moving to a care facility and could no longer care for his beloved dogs – an all too common story as we and our pets age.

Bill and Barbara were happy to help and immediately fell in love with Chase and Clancy. They kept the monsignor up to date on his golden retrievers, sending photos of the dogs playing on the beach and enjoying the good life. Bill and Barbara not only provided a happy home and love to these senior dogs, they also provided a valuable final gift to a man comforted in the knowledge that his pets were safe and happy.

But then tragedy struck.

“It was one year and two weeks from adopting the boys, that Clancy, our youngest senior golden, woke up in the middle of the night, panting. The next day, he didn’t want to go for a walk,” Bill said. “We knew something was wrong and immediately brought him to the vet.”

Clancy was diagnosed with internal bleeding associated with hemangiosarcoma, a type of aggressive and uniformly fatal cancer that occurs almost exclusively in dogs. Hemangiosarcoma is particularly devastating because the growing tumors can rupture, causing rapid and significant blood loss which often is fatal. Although some dogs exhibit no signs of disease prior to tumor rupture, others do show clinical signs, such as lethargy and weakness. However, these signs can be so subtle they may go unnoticed by owners.

“Before Clancy got this cancer, I had never heard of this disease. It was fast and devastating. He seemed just fine days earlier,” Bill said. “While we tried to save him, Clancy did not survive surgery.”

But Bill and Barbara’s journey with cancer was not over. Five months later, their other golden boy Chase also was diagnosed with hemangiosarcoma. But this time, Bill and Barbara knew more about the cancer and went into action.

“We immediately brought Chase to our local veterinary teaching hospital,” said Bill. “Researchers put Chase on some alternative medications. These trial treatments helped extend Chase’s life for four more months. We were thankful for the extra time and the care that Chase received.”

Bill’s and Barbara’s experience opened their hearts and minds to the power of veterinary research and the need to help support animal cancer studies that will give our pets a fighting chance with cancer. They support this passion by raising funds for and supporting hemangiosarcoma research.

Morris Animal Foundation has been funding hemangiosarcoma research for nearly 30 years. Our funding has helped researchers find new ways to diagnose and treat the disease in dogs. Recent studies have looked at genetic factors and high chemotherapy resistance in this cancer as well as new ways to block tumor growth.

One of our funded researchers, Dr. Erin Dickerson and her team at the University of Minnesota, were the first to identify a specific cell population in hemangiosarcomas and a mechanism that these cells use to make themselves more resistant to standard chemotherapy treatments. Her next step is to try to block this mechanism so chemotherapies can do their work.

“We are now looking at the drug propranolol and other beta blockers that are used to treat heart disease in both dogs and people,” said Dr. Dickerson. “We found that when cancer cells are treated with propranolol at the same time as chemotherapy, propranolol increases the levels of chemotherapy available to the internal targets of the cell and kills the cancer cells.”

One of the Foundation’s other ongoing cancer studies is the Golden Retriever Lifetime Study that will help us identify risk factors for four major cancers, including hemangiosarcoma, and possibly other diseases and health problems in dogs. Golden retrievers are the focus of the study due to their high prevalence of some of the most common canine cancers. This groundbreaking project is collecting data on 3,000+ golden retrievers, enrolled as healthy young dogs, throughout their lives, so we can learn more about disease not just as an endpoint but as a process.

While Bill and Barbara still greatly miss Chase and Clancy, they recently opened their home and hearts again and adopted another golden retriever, a 6-year-old named Rhed.

“We haven’t given up on our golden boys,” Bill said. “Our experience with canine cancer in this breed has made us even more passionate about supporting research for hemangiosarcoma so fewer families have to go through the heartache of losing a dog to cancer.”

Learn more about our work in hemangiosarcoma. 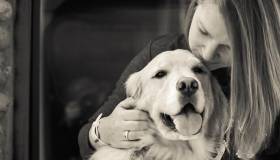