March 19, 2018 – Galloping consumption, the White Plague, Pottís disease, phthisis and scrofula — the names we've given tuberculosis since ancient times speak to the nature of this deadly disease. First described in people more than 6,000 years ago, TB continues to cause chronic illness and is one of the top 10 causes of death in humans worldwide.

But tuberculosis isn't just a threat to human health; it's deadly in animals, too, impacting species as diverse as cattle, dogs, hyenas, possums, wild boars, badgers, white-tailed deer, elephants and numerous endangered animals. The toll it takes on animals is incalculable.

"Tuberculosis is certainly one of the most devastating infectious diseases of wild animals and human beings," said Dr. Ana Marcia Guimarães, a Morris Animal Foundation-funded wildlife tuberculosis researcher from the University of Sao Paulo, Brazil. "The disease is hard to diagnose and treat. And, once present in certain animal populations, it is very difficult to eliminate.”

Loss of habitat combined with increasing contact between humans and cattle with wildlife are potential sources of disease spread, but the true incidence of tuberculosis in wildlife is unknown.

Morris Animal Foundation has funded 20 studies in the last decade focused on the growing danger tuberculosis poses to wildlife. Dr. Guimarães currently is analyzing the genetic makeup of the Mycobacteria species that causes tuberculosis.

"Our research is focused on trying to understand how the different pathogen species of tuberculosis are able to adapt to the various affected hosts, and use this knowledge to rationally build therapeutic and preventive interventions,” said Dr. Guimarães.

On the other side of the Atlantic, Dr. Jorge Gutierrez-Merino at the University of Surrey, England, is tackling the problem of tuberculosis transmission from badgers to cattle in the United Kingdom in a very unique way — using probiotics to decrease disease-causing Mycobacterium bovis in the stomach and intestines of badgers.

Probiotics can increase the number of beneficial bacteria in the gut, providing an inhospitable environment for unwanted bacteria. M. bovis is shed in the stool of infected badgers, where it can contaminate pastures and other foodstuffs eaten by cows.

Morris Animal Foundation looks at disease from a multi-species, global perspective. Bovine tuberculosis has been implicated in driving population declines in a number of endangered species such as elephants and African lions.  A better understanding of the disease in susceptible animals in diverse habitats will arm researchers with the information they need to improve detection methods and disease management plans, creating  a more sustainable and healthy  planet for all animals. 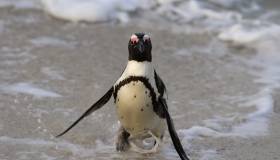