Giving in Memory of Beloved Pets

April 23, 2021 – If there’s one thing you can count on, it’s that Janet, a longtime Morris Animal Foundation supporter, will give back in memory of the animals she’s loved. For three decades, whenever a beloved cat or horse died, Janet made a gift to the Foundation in their honor.

“They gave me unconditional love and if I can further the science for animal health, I am all for it,” she said. “I’ll fund 10 studies if it can help even one person save their cat or dog.”

Most recently, she gave in the name of her tortoiseshell cat, Viper. Contrary to her name, Viper was always very sweet, said Janet, and loved to curl up on her lap while she watched television.

Viper lived a good life but, unfortunately, over time she became ill with both pancreatitis and lymphoma. Janet fought hard to save Viper and was in and out of veterinary clinics for the better part of five years before it was finally time to say goodbye.

Janet was heartbroken but made a donation in honor of Viper to continue to support research at Morris Animal Foundation advancing feline health, including studies in pancreatitis and lymphoma.

Thanks in part to Foundation funding, researchers conducted early basic studies that helped inform the development of the first feline leukemia virus. Lymphoma in cats cannot be fully prevented, but it can be drastically reduced through vaccination against the feline leukemia virus – a virus strongly linked to lymphoma – helping save millions of feline lives.

People like Janet, who give in honor of the pets they have lost, help make these advances possible. 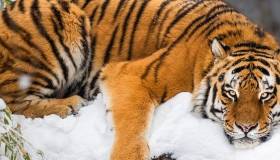