November 11, 2021 – Step outside and it’s obvious the world is a noisy place. Researchers have studied the effects of noise on people for decades. We know loud and constant noise can create physical and psychological stress, interfere with communication and cause sleep disturbances. In severe cases, noise can cause cognitive impairment, tinnitus, hearing loss and even affect overall health!

If noise has negative effects on human health, it likely has detrimental effects on animals as well. To date, there aren’t many published studies looking at the effect of noise on animals, but this is changing as more researchers turn their attention to this increasingly important problem.

More than a decade ago, Morris Animal Foundation-funded researchers conducted a study on ambient noise and its effects on seahorses living in aquaria. Researchers learned that while seahorses have poor hearing abilities, the average ambient noise, including tank equipment noise, is audible to these animals.

The team suspected that long-term exposure to tank-related noise leads to chronic stress in seahorses. Their data confirmed changes associated with noisy tank living, from changes in seahorse behavior to weight loss to changes in white blood counts indicating stress. The findings from this study led to recommendations and guidelines for tank soundproofing for public and home aquaria that now provide a better sensory environment for captive aquatic animals. Fish lovers may have noticed how pumps and filtration systems are much quieter than a decade ago, thanks to studies like this.

Just like aquaria, noisy zoo environments also may inadvertently increase stress in captive animals. This is especially problematic for animals in conservation and restoration programs.

One Morris Animal Foundation-funded research team is studying how the acoustic environment of zoos alters frog vocalizations, and how this exposure impacts the welfare and wild release success of these animals.

Frogs are facing an extinction crisis with more than 500 species listed as critically endangered. Captive breeding is key to saving many of these animals. If vocalizations of captive, breeding frogs are changing, this could impact how they will behave once released. Frog vocalizations are critical for establishing territories and finding a mating partner in the wild. If a frog can’t speak the same language as its wild counterparts, it’s possible that a frog’s ability to thrive in the wild may be comprised from the get-go.

The research team is using their findings to build more acoustic-friendly shelters for breeding frogs and see if these shelters improve frog communication and reduce stress. They also hope their data will lead to recommendations and actions to reduce human-generated noise in zoo environments, that will in turn lead to more successful breeding and release of frogs and other animals.

Human-generated noise also is a major concern for free-ranging, wild animals. Growing metropolitan areas, development and land changes increasingly are contributing to a noisier world. It’s getting harder to find places with only natural sounds, like wind in the trees or a babbling brook, without some human-generated noise in the background. And the data backs this up; more than 83% of land in the continental United States alone is exposed to noticeable vehicular noise. What is this doing to our wildlife?

One Morris Animal Foundation-funded study is trying to answer this question in invertebrates. According to the researchers, less than 4% of noise research has been conducted on invertebrates, and yet invertebrates make up more than 95% of the world’s species. Invertebrates are an important component to most of the world’s food webs, and their populations are dwindling in what scientists call a silent extinction. If invertebrate populations continue to decline, we will see decreased pollination, pest control, soil and water health, and food availability for species that feed on insects, including birds and reptiles. Fewer invertebrates also will negatively affect human food webs.

The team is looking at how urban noise affects the health and reproductive success of crickets. Crickets are easy to study in the lab and can be used as a model to inform how noise may be affecting the wider invertebrate families around the world. In addition, the work will fill in a critical missing piece in the invertebrate health and reproduction body of knowledge. The team also hopes their data will inform legislative and management decisions about impacts of noise exposure on urban wildlife.

Another recently funded study is focused on assessing the impacts of underwater noise on the behavior and stress levels of two endangered dolphin species in Malaysia. Dolphins rely on sounds and use whistles, squeaks and echolocation (such as clicks) to navigate, communicate and forage. The research team suspects human activities, such as boat traffic from tourism, sea transportation and fishing, increase underwater noise to levels that may be harmful to dolphins. This makes it harder for dolphins to hear each other and forces them to use more energy to whistle louder than the engine sounds of passing boats.

This human-generated noise could be dangerous, making it difficult for the dolphins to hunt for food or even separating individuals from their pods. Researchers hope their findings will inform conservation strategies to protect the dolphins as well as other marine mammal species in the region.

How You Can Help

Many of us have become accustomed to unwanted sounds, but we need to be aware that human-generated sounds change the world around us and impact all animals, even those that seem ubiquitous and plentiful. Morris Animal Foundation hopes filling in the missing research piece of how sound impacts wild animals addresses both health and environmental issues.

Make a donation today to support these and other studies that can fill in critical missing pieces of the animal health research puzzle. 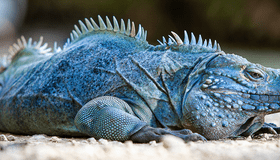