Bowie, the Dancing Dog, Faces Cancer With Loving Support From His Owner

March 15, 2016 – This past November, Laurie Sullivan and her golden retriever Bowie performed in a freestyle dance event at the World Canine Freestyle Organization North American Nationals. It wasn’t their first time competing there, and it probably wasn’t their most polished performance. However, for Laurie, it was one of the happiest moments of her life.

Bowie has been battling hemangiosarcoma since April 2015, when he refused a jump at an American Kennel Club rally obedience competition. Bowie rarely missed a jump, and Laurie immediately knew something was wrong. Two days later, she learned he had hemangiosarcoma, one of the most aggressive types of cancer in dogs.

Bowie had emergency surgery to remove his tumor followed by several rounds of chemotherapy. After Bowie finished his final round of chemotherapy in August 2015, he was exhausted and depressed. Laurie began taking him for swimming and hydrotherapy – two activities Bowie loved before he got cancer. Bowie’s attitude started to steadily improve, and Laurie considered competing again, something that would’ve been unthinkable just a few weeks earlier.

“I wanted Bowie to have one more turn around the ring and hear another round of applause,” Laurie said. Laurie got her wish, and Bowie returned for one final triumph.

“It was a really special feeling being in the ring again,” said Laurie. “It was a tremendous victory, no matter what happened. I got what everyone who has a dog with cancer wants – more time.”

Laurie and Bowie celebrated his 11th birthday at the end of November. As the first week of December began, Laurie faced another crisis, one she didn’t anticipate.

“I saw this big, cavernous space of waiting in front of me. I knew Bowie had exceeded all expectations, and we met many goals; but now what?” said Laurie. “I had a tough few weeks. It seemed interminable; this anticipation of something going to happen.”

Laurie said this was a pivotal time, but she realized that, “it was a mistake to get sad or depressed.” Recently, she watched Bowie rolling in the snow with his dog brother, and had a feeling of peace as they face the unknown together. “I realized Bowie is happy.” 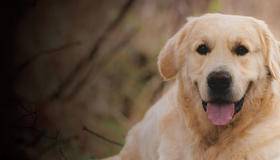