October 23, 2020 – Moose are a charismatic animal in the United States, with their characteristic antlers, massive size and gangly legs. Important keystone species in their ecosystems, they also are critical to the ancient cultures of Native American and First Nations people.

But, some moose populations have seen a dramatic decline in the northeastern United States in the last two decades. Evidence points to excessive winter tick infestation as a major cause of death in these majestic animals.

Milder and shorter winters in many states allow ticks to flourish and expand their ranges during months when they would normally be inactive, translating to heavy winter tick burdens that place stress on moose. Staggering numbers of ticks have been found on some animals, approaching 70,000 ticks per individual. Calves are particularly susceptible to the effects of heavy tick burdens – the ticks literally drain them of blood to the point of death.

Two new Foundation-funded studies hope to improve and save the lives of our iconic moose populations by focusing on the problem of winter tick infestations.

The first study is a pilot project from the University of Vermont. The team has evidence that suggests immature ticks are sensitive to infections by some naturally occurring fungi. The team will apply special fungal formulations to developing ticks under a variety of conditions to identify the optimal combination that works best to control ticks.

The team hopes the results can inform novel strategies to treat moose habitat. Because moose often frequent specific places, wildlife managers would only apply the fungal preparations to precisely defined areas at times when ticks would be most vulnerable, ultimately leading to decreased winter tick burdens on moose.

“We’re using a very targeted approach to treating the ticks at their vulnerable, off-host stage in our project,” said Cheryl Sullivan, a PhD candidate working on the study.

In the second study, University of Maine researchers are looking for evidence of ticktransmitted diseases that also might be contributing to moose declines.

Together, these groundbreaking projects may lead the way in saving North American moose populations, and could help other species threatened by tick infestations and the diseases they transmit. 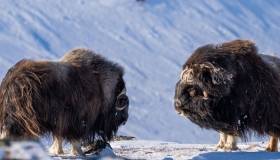 Saving Muskoxen is a Collaborative Effort for this Researcher 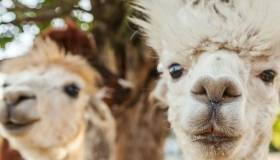 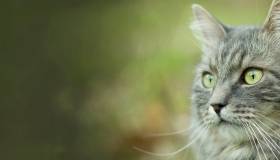