Saving Animals On the Brink of Extinction – Focus of New Collaboration

July 26, 2022 – According to a 2019 landmark United Nations report, nearly one million animal and plant species are threatened with extinction, many within the next few decades. Other species are seeing steep drops in population, with only a few individuals remaining in the wild.

Reduction of a species to only a few individuals is associated with a unique set of problems. If only a few animals remain in the reproductive pool, genetic diversity is lost. Inbreeding then takes its toll after a few generations, resulting in weak and unhealthy animals that may lack resilience to multiple events including disease outbreaks.

Scientists, animal biologists and conservationists recognize that new strategies are needed to slow or stop the loss of individuals as well as improve the genetic diversity of small populations. Revive & Restore, a nonprofit that promotes the use of biotechnology to solve pressing conservation problems, recently joined forces with Morris Animal Foundation to run the Wild Genomes grant funding program this year. The aim of Wild Genomes is to put the tools of genomics and bio-banking into the hands of conservationists and wildlife managers around the world. For the first request for proposals undertaken by this partnership, the topic will be genomes of amphibian species.

Amphibians are a group of animals that have experienced particularly drastic population declines. Species of interest are those with ecological significance, strategic conservation value, and/or evolutionary significance. There is a particular need for proposals that address genomic insight into wild animal health as it pertains to emerging or understudied diseases and climate change resilience. Impacts of pollution and habitat loss are other areas that might be explored.

Any successful genetics program has to start with a firm understanding of a species’ genetic makeup – their DNA. Scientists cracked the dog genetic code in 2005, but in many other species there is little to no genetic information available. Without this code, scientists cannot pursue advanced conservation strategies. The new partnership helps close this knowledge gap.

“The needs of critical wildlife species in the face of habitat degradation and climate change are immense, and animals like amphibians often are ignored,” said Dr. Janet Patterson-Kane, Morris Animal Foundation Chief Scientific Officer. “We need some hope right now in terms of achieving measurable and significant improvement for the health and welfare of some of these species, and we see placing high-tech tools into conservation programs for real-world use as a powerful way of achieving this.”

The collaborative team opened the Wild Genomes-Amphibians call in June with the expectation that approved projects will begin in 2023. 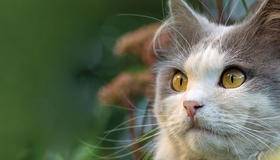