Protect Your Dog from Deadly Pancreatitis This Holiday Season

Updated November 20, 2018 – The pancreas is the source of insulin in your dog’s (and your) body, as well as an important organ for digestion. But when the pancreas becomes inflamed, it can lead to a condition called pancreatitis – with sometimes fatal consequences. Knowing more about the pancreas can help you understand pancreatitis, and learn how you can protect your dog from developing this deadly disease.

The pancreas is a bit different from other internal organs because it performs two completely different functions. The endocrine pancreas (endocrine means hormones are produced and secreted directly into the blood) is responsible for insulin and glucagon production, which are the two hormones responsible for maintaining steady blood glucose. The exocrine pancreas (exocrine means hormones are produced and secreted through a duct) produces several digestive enzymes.

The two parts of the pancreas live in harmony, with the insulin- and glucagon-producing islet of Langerhans cells surrounded by the cells that produce digestive enzymes.

When the pancreas becomes inflamed, the exocrine portion of the pancreas starts leaking enzymes into the surrounding tissue. The enzymes start digesting the cells around them, just as they digest food. If the enzymes leak into the bloodstream, they travel throughout the body, and cause damage even to distant organs like the heart and kidneys. Because the pancreas sits close to the liver, inflammation of the pancreas frequently affects the liver. A dog with pancreatitis has a painful abdomen, vomiting and fever. In the most severe cases, the leaked enzymes result in damage to other organs, leading to organ failure and death.

There are many causes of pancreatitis, but the classic scenario is a dog that eats a large amount of fatty food in one sitting (for example, a stolen holiday turkey). Acute (sudden onset) pancreatitis is diagnosed by a combination of clinical signs, history, blood work and abdominal ultrasound. Treatment for acute pancreatitis consists of supportive care such as pain medication, intravenous fluids, drugs to control vomiting, and diet support. Although acute pancreatitis is a serious illness, many dogs recover with supportive care.

Keeping a watchful eye on your four-legged chow hound is important during the holidays. To date, there have been no diagnoses of acute pancreatitis in dogs in the Golden Retriever Lifetime Study, but with lots of tempting goodies and indulgent house guests around, extra vigilance is needed to ensure that your dog doesn’t end up spending the holidays in the hospital.

The Golden Retriever Lifetime Study is a unique opportunity to monitor a well-defined and closely followed group of dogs over a long period of time. While the study focuses on cancer development in the study cohort, we also are interested in other diseases, including acute pancreatitis. What we can learn about diseases in this study group will help all dogs have longer, healthier lives! 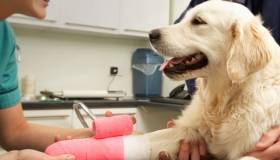 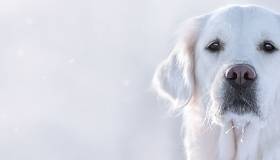