Probiotics and Health in Horses

Probiotic awareness and supplementation (whether through food or supplements) is not only becoming more common in people and small animals, such as cats and dogs, there is growing interest in using probiotics in larger species, including horses.

Horses and their close relatives, including ponies, donkeys and zebras, have digestive tracts that differ in significant ways from not only small animals, but also from other grazing animals such as cattle and deer.

Cows and related animals ferment and digest complex foods such as hay and grass at the beginning of their digestive tracts. Once the material has been subjected to breakdown by bacteria, the rest of a cow’s digestive tract is fairly similar to animals such as the pig, cat and dog.

Horses have almost the opposite digestive tract set up; their stomach and small intestine are similar to humans, dogs and cats, but the business end of their digestive tract is, well, at the other end. As we learn more about how gut bacteria influence health and disease in small companion animals, equine veterinarians also are exploring how gut bacteria affect important horse diseases such as foal pneumonia, laminitis and colic.

Morris Animal Foundation has funded several research projects that have increased our knowledge of how this complex population affects the health of horses. One project noted how the bacteria change in conditions similar to starch-induced laminitis and identified bacteria that could be beneficial as probiotics. Another funded study was one of the first studies describing the bacteria found in foals, and how it changes over time. Ongoing studies include a further look at how the microbiome influences starch metabolism in the hope of identifying bacterial factors that contribute to serious and often fatal diseases such as diarrhea, colic and laminitis.

Manipulating gut bacteria to maintain good health and prevent disease through the use of probiotics represents the cutting edge of medical research. Morris Animal Foundation has a long history of funding innovative research to improve the lives of all animals worldwide. Learn more about how the foundation is investing in probiotic research, as well as our other equine studies. Together, we can make the future brighter for horses and all animals everywhere. 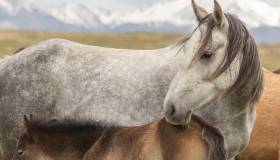