Long-term observational studies in human medicine have been used for decades to identify important risk factors for disease. Launching a similar study in veterinary medicine proved to have unique challenges, while also offering a key opportunity to advance animal health and comparative oncology. The study is described in a paper published today in Philosophical Transactions B, from Royal Society Publishing. The influential scientific journal addresses important current topics in the life sciences.

“The Golden Retriever Lifetime Study: establishing an observational cohort study with translational relevance for human health,” was published in a special issue of Philosophical Transactions B themed “Cancer across life: Peto’s paradox and the promise of comparative oncology.” The paper is open access.

“Cancer is a disease that crosses the animal kingdom. The Golden Retriever Lifetime Study is the first prospective longitudinal study attempted in veterinary medicine to identify the major genetic, dietary and environmental risk factors for cancer and other important diseases in dogs,” said Dr. Diane Brown, corresponding author and chief scientific officer at Morris Animal Foundation, the organization funding and managing the study. “We were honored to be invited by the editors and the Royal Society to help further the understanding of cancer across and between species – dogs and humans share so much including, unfortunately, cancer.”

The paper provides rationale for the Golden Retriever Lifetime Study, a major research initiative at Morris Animal Foundation. It also includes methods used to enroll the 3,000 golden retrievers whose owners and veterinarians must complete comprehensive questionnaires as well as collect biological samples each year. Detailed records of health conditions, diet, activity and environmental conditions, both the unique and the mundane, are collected throughout each dog’s life. The paper also outlines the translational opportunities of the study to human health.

“This study is first and foremost designed to help us understand more about canine cancer, and learn more about factors that lead to illness as well as health,” said Brown. “That being said, we also will learn much about the environments in which these dogs live – the same environments they share with their families, and perhaps the same risk factors that may influence human disease.”

The pilot study for the Golden Retriever Lifetime Study began in 2012, and the full study cohort completed enrollment in March 2015. The study is expected to last 10 to 15 years, throughout the lifetimes of all participating dogs.

The Golden Retriever Lifetime Study would not be possible without the generous support of the study’s partners. The founding partner is The Mark & Bette Morris Family Foundation. Platinum sponsors for the study are The Blue Buffalo Foundation for Cancer Research, PetCo, Zoetis and VCA Antech, Inc.

Morris Animal Foundation is a nonprofit organization that invests in science to advance animal health. The Foundation is a global leader in funding scientific studies for companion animals, horses and wildlife. Since its founding in 1948, Morris Animal Foundation has invested more than $92 million toward 2,300 studies that have led to significant breakthroughs in diagnostics, treatments, preventions and cures for animals worldwide. Learn more at www.morrisanimalfoundation.org. 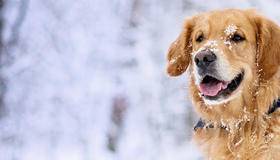