Marla Yetka’s relationship with the Foundation started with a coincidental meeting in a Denver park. Marla was taking a stroll with her young golden retriever, Snickers, when she learned that a new study was looking for golden retrievers to enroll and might she be interested? That moment changed both their lives in ways Marla could not have predicted.

“We’ve always had golden retrievers and we’ve lost all of them to cancer,” said Marla. “I was taking a walk in the park when suddenly a woman just seemed to jump out of nowhere and it turned out to be Claudia Haworth, the wife of a past Foundation CEO. Claudia told me about the Study and I immediately knew I had to participate – it was a no brainer. We helped recruit one of Snickers’ littermates, too!”

That chance meeting occurred 8 years ago, and a lot has happened since then. Snickers had a cancer scare in 2019 when a tiny growth near his eye turned out to be a malignant cancer, cutaneous hemangiosarcoma. The tumor was completely removed and Snickers remains cancer-free, but Marla stays vigilant.

“My hope for the Study is that we’ll learn something so that as pet parents we won’t have this constant worry that our dogs are only going to be alive for only 7 or 8 or 9 years,” said Marla. “I hope to see that change in my lifetime.”

For Marla, signing up for the Study was not only out of her love for the breed, but an extension of her work as an active volunteer with many local organizations. Beyond being a Study participant, she’s a valuable awareness and fundraising partner for the Foundation. Marla and her husband, Chad, own a craft winery in Denver named Bigsby’s Folly, in honor of their first golden retriever that died from cancer.

Marla and Chad host many events at Bigsby’s Folly that benefit the Foundation, from Yappy Hours and wine tastings to their Annual Howl-O-Ween party. A portion of sales from their new portable aluminum bottles benefits the Foundation, and 100% of proceeds from sales of their biscuit bottles (dog biscuits in mini wine bottles) goes to the Foundation.

Marla’s generosity includes acting as an ambassador for the Foundation, highlighting the work the Foundation does anytime she is interviewed by the media or speaks in public.

“When we started Bigsby’s Folly five years ago, few of our customers had heard of the Foundation,” said Marla. “I think awareness now is a lot better. We’re a dog friendly business so we have lots of customers who love dogs, and many have lost a dog to cancer. I’m always grabbing a Foundation brochure and telling someone about the work Morris Animal Foundation does around canine cancer.

“I hope that in our small way we’re helping spread the word about the Foundation. We’re trying to educate people about the work the Foundation does, and what everyone can do to help. I really believe in the mission of the organization as a whole, not just because of the Study but everything, such as the fund to help wildlife impacted by the Australian wildfires.”

The Golden Retriever Lifetime Study depends on Study participants, like Marla and Snickers, to make the Study a success. As we make our way to our 10th anniversary, we’re reflecting back on the long journey we’ve taken together. We’re immensely grateful to all our participants, hero dogs and veterinarians who’ve worked together on this groundbreaking study. 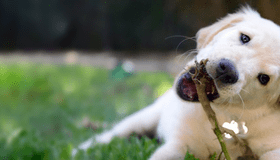