April 23, 2020 – Sarcoptic mange, a disease caused by mites that burrow into the skin, is on the rise in American black bears. In some animals, sarcoptic mange can cause severe hair loss, widespread secondary skin infections, extreme weight loss, blindness and death. While sarcoptic mange can be easily treated in pets with anti-parasitic medications, treating wildlife, either free-ranging or recovering in rehabilitation centers, is challenging at best.

Morris Animal Foundation-funded researchers from the Wildlife Center of Virginia are busy working on a potential solution to this problem. They are studying a promising drug they hope will make it easier for wildlife managers to treat American black bears with mange.

“Right now, the common practice is to treat sarcoptic mange in wildlife with two doses of a drug called ivermectin and it works really well,” said Dr. Peach Van Wick, principal investigator on the project. “However, the difficulty for wildlife managers is that two doses of ivermectin need to be given two weeks apart to be effective as it only kills adult mites. This often requires the wild patient to be held in captivity or recaptured for the second dosing that is not always feasible or practical.”

The Wildlife Center of Virginia is the only facility in the state of Virginia licensed to treat black bears and, in recent years, the care team has seen a dramatic increase in the number of mange cases in this species. Sadly, many neighboring states and rehabilitation centers are seeing the same upward trend.

“We became interested in the potential of the drug fluralaner after hearing from a colleague who successfully treated a red fox with mange with just a single dose,” said Dr. Van Wick. “Fluralaner is FDA-approved for flea and tick prevention in domestic animals in the United States and works well against the two types of mange seen in dogs. We wanted to see if it also could help treat mange in black bears seen at our facility.”

Responding to this tip, the next black bear mange patient seen at the Wildlife Center of Virginia was treated with a single dose of fluralaner. The female bruin was observed for 13 weeks and made a full recovery. She was released back into the wild with a radio collar to monitor her health. Since then, the team has successfully treated a few more black bears suffering from mange with fluralaner.

“Even with these successes, we have to be cautious,” said Dr. Van Wick. “One obstacle in treating wildlife with a new drug is veterinarians have to extrapolate dosing from what we know works in other species. While we can see fluralaner worked in a few cases, we don’t fully know if it’s appropriate and effective for the long-term recovery of American black bears and other affected species. There’s still more work to be done.”

Dr. Van Wick and her team are working to determine the appropriate and effective dose of fluralaner in American black bears. They also want to know how long the drug remains in the body of the bear. For wildlife, this is crucial as any animal that dies in the wild from mange or any other disease will be eaten by other animals; any drug levels persistent in the meat of the bear may have a ripple effect on scavenging animals, the environment, and maybe even hunters that consume its meat.

To answer these questions, the team needed to test the drug in healthy bears. This is the same practice used in human drug trials that use human volunteers to measure the action of the drug in the body without the noise of a pre-existing condition. This ensures the safety and effectiveness of the drug before administering it to a patient with a serious health condition.

“The only healthy bears we see at the Wildlife Center of Virginia are orphaned cubs,” said Dr. Van Wick. “We administered fluralaner to 10 orphaned cubs and collected blood samples for analysis to better understand how this drug works in this species’ body. After the study and successful rehabilitation, we released all the cubs back into the wild.”

Sample analysis did have an interesting story to tell. The pharmacokinetics of fluralaner, how it acts and is processed in the body of bears, was quite a bit different from those published in dogs, including the amount of time it take the drug to reach its maximum concentration within the blood and how long it persists in the body.  Dr. Van Wick notes this finding highlights the importance for these types of studies in wildlife. They provide much needed, species-specific drug information so wildlife veterinarians can provide better care for the animals at their facilities.

WHAT YOU CAN DO FOR WILDLIFE WITH MANGE

Over 100 different species are affected by sarcoptic mange worldwide. In North America, the most negatively impacted animals belong to the canid family, including foxes, wolves and coyotes. However, we also see mange cases in racoons, squirrels, deer, black bears and even people.

“Mange is a disease of density,” said Dr. Van Wick. “And even though disease is a natural part of population control, some disease trends are a result of wild populations pushed into smaller and more fragmented habitats. We will continue to see some diseases spike in an unnatural way as animals are squeezed into smaller ranges. This could be one of the reasons why we’re seeing an increase in mange in the American black bear and why this seems to be a growing health concern for this species.”

If you see a wild animal you suspect has sarcoptic mange, never try to medicate it by hand or in food. Mange is highly contagious and should be properly diagnosed and treated by trained professionals. Instead, Dr. Van Wick recommends reporting your sighting to your state game department or contacting a wildlife rehabilitation facility that can safely trap and transport the animal and see if it can be successfully treated and released. Pictures taken from afar with a zoom lens or from cameras on your property, also are helpful for reporting. This citizen science type of work helps local agencies gauge the spread of diseases and lets them know what species are being negatively affected and if interventions are needed.

Morris Animal Foundation has been funding wildlife research for more than 50 years. And, thanks to our many generous donors, we can support important and life-saving work of investigators like Dr. Van Wick, working to find innovative solutions for today’s serious health challenges in wildlife. Learn more about our wildlife studies and how we are helping thousands of species around the world survive and thrive in the wild. 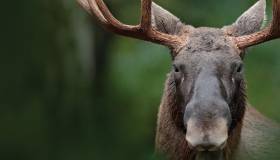