February 4, 2019 – Chris Lewis became a Morris Animal Foundation Loyal Friend this year because he knows all too well the gap between human cancer treatment and animal oncology. After losing his beloved golden retriever, Dixie, to lymphoma, he wants other animals to live the healthy lives they deserve for as long as possible.

Dixie was the first dog Chris ever owned and was right by his side through the biggest, happiest and saddest moments of his life for a decade. Those include the start his first real job, the purchase of his first house and the divorce from his first wife. The pup even served as the maid of honor for his second wedding. He says she always seemed to understand people and emotions and how she could help.

“She was just everything you could ask for in a companion and brought so many smiles and such joy to everyone who encountered her,” said Chris. “She was truly one of the most wonderful creatures I’ve ever had the pleasure of knowing throughout my lifetime.”

He says he’ll never forget the shock he felt when his veterinarian called him with the cancer diagnosis after a routine physical. The disease originally grew slowly, allowing Chris to search for different methods to treat Dixie, but he was frustrated at just how few options there were. That feeling was exacerbated by his career. The company he works for produces antibodies that activate the immune system to target cancer cells in humans. Unfortunately, nothing similar existed for dogs and traditional chemotherapy left Dixie drained and didn’t help.

“It was unfair. She deserved better than that in her final days,” Chris said when remembering how defeated his friend looked near the end. “There are so many advances in human medicine, but so little for dogs, like Dixie.”

After a year and a half of fighting, Chris finally had to say goodbye. A few years after she passed, Chris started looking for places to give that he could believe in and he discovered Morris Animal Foundation and the Golden Retriever Lifetime Study.

He was impressed by the study, the most extensive ever undertaken in veterinary medicine, that gathers information on more than 3,000 golden retrievers throughout their lives to identify risk factors for cancer and other diseases in dogs. While his other dog, Jasper, was too old to participate, Chris knew he wanted to support it and the Foundation as a Loyal Friend, through monthly gifts.

“It was serendipitous and pretty much everything I could possibly want to help and donate to,” he said. “The scope, depth and breadth of that study is unparalleled for animals. You combine that with golden retrievers and what we went through with Dixie and it just made sense.”

Monthly giving is one of the easiest ways you can help the animals we all love have brighter, healthier futures. Gifts of any amount, large or small, will support studies that advance the health of animals everywhere. Join Chris by becoming a Loyal Friend today! 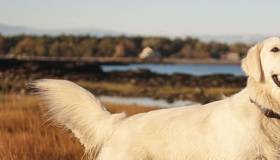