Fighting Back Against Cancer with New Technology

November 8, 2016 – Oyl the cat doesn’t care that the hair on his back has turned prematurely grey. Or that his owner, Jordan Borders, has been worried about him. Or that he is participating in a study that could help thousands of other cats. The only thing Oyl cares about is wet food and finding a nice sunny spot for a snooze. Oyl doesn’t know it, but he is a very lucky cat.

Oyl is participating in a Morris Animal Foundation-funded study at the University of Illinois College of Veterinary Medicine, under the direction of Dr. Laura Selmic. The research team is testing a new device to help surgeons do a more thorough job of removing cancerous tissue during surgery. Oyl was one of the first cases enrolled in the study.

Oyl’s cancer journey started in August 2015, when Jordan noticed a small bump on Oyl’s back. The bump didn’t seem to be bothering Oyl, but the family’s veterinarian recommended they watch the lump. When it continued to grow, Jordan and Oyl were referred to the University of Illinois for further care. The oncology group at the university made a terrible discovery – the lump was malignant. Oyl was diagnosed with an injection-site sarcoma, an aggressive and invasive cancer.

The team at the University of Illinois knew that immediate surgery was needed to give Oyl the best chance for long-term survival. However, injection-site sarcomas are quick to invade surrounding tissue, making it is easy to leave some tumor cells behind after tumor removal. Until recently, surgeons had few ways to check for these microscopic cancer cells until after a tumor was removed and examined by a pathologist, sometimes days after surgery. Even a few cells can quickly multiply into a large mass, and it wasn’t unusual for surgeons to detect new tumor growth at the surgery site within two weeks of surgery.

The oncology team spoke with Jordan about entering Oyl into their study. Using the new device, they were able to look for any stray cancer cells left after removal of Oyl’s tumor. Jordan was on pins and needles during the procedure, but Oyl came through the surgery with flying colors, and the team was confident they had removed the tumor.

After surgery, Oyl had two months of adjunct radiation and chemotherapy. Jordan admits that she was plagued with doubts during the first few weeks of treatment. “Right after surgery was the most difficult time for me. I questioned my decision – I couldn’t see the end of the tunnel.”

Oyl steadily improved. He and Jordan made the long trips for radiation and chemotherapy. His surgery site healed well – the only clue left from his ordeal was a patch of white hair that grew back where his tumor was removed.

Finally, in May of this year, Jordan got the news she hoped for; Oyl was pronounced cancer free. Although he isn’t completely out of the woods yet, Oyl is thriving, and Jordan is ecstatic to have had another year with her beloved cat.

“I feel good that Oyl is helping other cats and their families by participating in this trial,” said Jordan. “It’s been a big commitment on our part, but I know how scary this disease can be for cat owners. I’m glad that our part in this study can provide hope for others facing the same difficult decisions.”

Oyl’s journey might have had a different ending if this study wasn’t available. Your gift during The Season of Hope helps support studies that ensure cats like Oyl can enjoy many more years with their families. And now, through the end of the year, your gift will be matched up to $100,000. Thank you to all of our donors who are helping animals have longer, healthier lives! 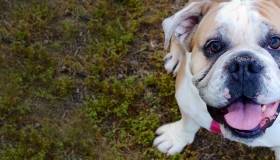 When Cancer Isn’t Cancer: Some English Bulldogs May Instead Have Newly Identified Syndrome