March 19, 2020 – Spend a day watching the Westminster Kennel Club Dog Show and it’s hard to believe that a shih tzu shares a common ancestor with an Irish wolfhound. With over 400 recognized breeds, the variety of dogs is mind-boggling. But genetic studies tell us that all dogs trace back to an extinct wolf species shared with the gray wolf, Canis lupus.

Thanks to thousands of years of human interaction and intervention, today we have a large variety of dog breeds proudly strutting across our television screen and our living rooms. The story of how dogs have evolved from wolf to Chihuahua is a fascinating one that starts with our respective ancestors earliest encounters.

Dogs and humans – an ancient partnership

Most researchers who study canine genetics agree that dogs are really domesticated wolves – after all, their scientific name is Canis lupus familiaris. But the exact time that the relationship between wolves and humans turned from distrust and fear to a mutually beneficial partnership is disputed. A large body of research suggests that dogs were domesticated between 12,500 and 15,000 years ago, but recent genetic studies suggest that domestication might have taken place even earlier. Some researchers believe dogs might have comingled with humans as early as 130,000 years ago, long before our human ancestors settled into agricultural communities.

Another controversy surrounds the origins of these earliest domesticated dogs. Evidence pointed to both Asia and Europe as the site of initial domestication, resulting in an unusual scientific tug of war. A 2016 study suggested that dogs were actually domesticated twice –in both Europe and Asia, but a study published in 2017 pushed back on these results and suggests one domestication but provides evidence that this event took place earlier, between 20,000 and 40,000 years ago.

Recently published research in Cell Reports, looking at the genetics of more than 150 different dog breeds, also has unearthed genetic traces of a “New World Dog” that migrated with humans across the Bering Strait. Archaeological evidence existed of this ancient dog, but the study was the first to show “living evidence of these dogs in modern breeds,” including the Peruvian hairless dog and the Xoloitzcuintle. Most other dogs in North America are of European descent, first brought to the continent by waves of soldiers and settlers, and later imported for breeding purposes.

Selective breeding has occurred for thousands of years in numerous domesticated species, not just dogs. In our canine friends, breeding for specific behavioral traits, as opposed to conformational traits, occurred first. However, where and when certain types of dogs originated is still uncertain.

For example, when looking at different breeds of herding dogs, the Cell Reports study found something unexpected. When they compared the genetics of several well-known breeds of herding dogs, the researchers found that one group of dogs had its origins in the United Kingdom, another from Northern Europe, and yet another group from Southern Europe; the team thought they would be more closely related. When the researchers looked closer, they realized each group used a different strategy to herd their flocks, a pattern that was borne out in the genetic data .This supports the growing theory that multiple human populations started purposeful breeding of dogs independent of one another.

Most dog breeds we recognize today were developed in the last 150 years, spurred by what’s become known as the Victorian Explosion. During this time in Great Britain, dog breeding intensified and expanded, resulting in many of our most recognizable breeds of dogs.

The Victorians, influenced by the ideas of Darwin, became passionate about breeding for the ideal of a certain breed. Many of the conformational traits we think of as classic for a certain type of dog have their origins in this era.

Scroll through pictures of dog breeds from 100 years ago compared to their current counterparts and you can see the dramatic changes that have occurred as dog fanciers selectively bred for traits such as shorter legs (Dachshunds were taller back then), and stockier build (German shepherd dogs were lankier at the turn of the last century).

Breeding for conformational traits continued through the 20th century. The end result is the 400+ types of dogs recognized as distinct breeds.

The downside of this extensive breeding program was the loss of genetic diversity, and conformation changes that had detrimental breed-specific health consequences, including the development of undesirable diseases.

As we approach the third decade of the 21st century, technological advances have given scientists a new perspective on humankind’s best friend.

Canine companions spontaneously develop some of the same diseases that plague humans, such as cancer, heart disease and obesity. Researchers hope that dogs might shed light on how these conditions develop, ultimately leading to treatments that could help both species. One such study is the Morris Animal Foundation Golden Retriever Lifetime Study that is gathering lifestyle and genetic information on more than 3,000 golden retrievers. This groundbreaking project will provide a wealth of new information that will help identify risk factors for canine diseases, including many cancers. This study also has many translational components that may inform human health risk factors.

Morris Animal Foundation was one of the first organizations to recognize the potential of genetic research not only in dogs, but in cats, horses and llamas. By unlocking the genetic code, Foundation-funded researchers have discovered new therapy targets, genetic abnormalities underlying disease, and greater understanding of the problems afflicting our beloved companions. Learn more about how the Foundation continues to fund innovative research by the best scientists in order to advance animal health through science. 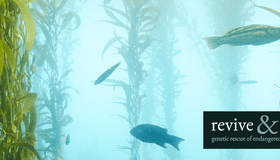 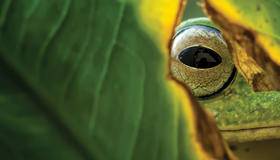 Saving Animals On the Brink of Extinction – Focus of New Collaboration 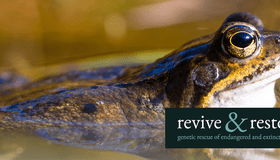