DENVER/April 26, 2018 –  Morris Animal Foundation-funded researchers at the University of the Sunshine Coast in Australia found evidence linking a relatively new retrovirus in koalas with chlamydia and cancer – major threats to the long-term survival of this species.

The team recently completed the largest study of wild koalas, specifically looking at koala retrovirus (KoRV). KoRV is species-specific (found only in koalas) and belongs to same virus family as human immunodeficiency virus that leads to AIDS in people and feline leukemia virus which causes cancer in cats. Findings from this landmark study were recently published in the Journal of Virology.

“There currently are two major types of KoRV; KoRV-A, which we believe has added itself to koala DNA and is now passed from parents to joeys in the northern part of Australia; and KoRV-B, which appears to be passed from koala to koala like other viruses in the environment,” said Dr. Peter Timms, Morris Animal Foundation-funded researcher and microbiologist at the University of the Sunshine Coast.

Following almost 300 animals over a five-year period in the State of Queensland, Dr. Timms, Postdoctoral Research Fellow Dr. Bonnie Quigley, and their team found 100 percent of the koalas in the study area were infected with KoRV-A. The more virulent and emerging strain KoRV-B was found in nearly a quarter of the population at the end of the study. But further surveillance shows infection rates are climbing. The research team needed to know the health impact of these infections and how it was spreading to figure out ways to mitigate this new threat.

“When we looked at whether having KoRV made a difference to getting another serious disease, we found significant links between koalas having KoRV-B and developing chlamydial disease and cancer,” said Dr. Timms. “We also found that mothers infecting their joeys is the most significant way KoRV-B is being spread through the group. Transmission of KoRV-B is low between adults but jumped to 100 percent transmission rate from KoRV-B positive mothers to their joeys.”

Understanding the prevalence, diversity and transmission of KoRV in different koala populations is helping inform future disease intervention strategies. Dr. Timms and his team currently are working to develop the first KoRV vaccine to combat this new threat to koala health and their long-term survival as a species.

“Morris Animal Foundation is proud to support Dr. Timms’ and his team’s research to save the iconic koala,” said Dr. Kelly Diehl, Senior Scientific and Communications Adviser at Morris Animal Foundation. “Funding for wildlife health research is miniscule compared to human health, and it’s important that the Foundation continues to lead the way in funding critical research to help vulnerable species like the koala have long, healthy lives.” Your Gifts In Action Winter 2018 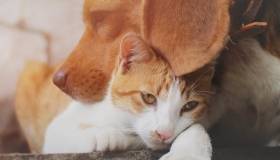