January 28, 2020 – Knowing if cancer has spread to lymph nodes in dogs with head and neck tumors is important for veterinarians to make therapeutic decisions. Unfortunately, current detection methods are not reliable, especially in detecting small numbers of cancer cells. A new technique being tested by Foundation-funded researchers at Colorado State University, however, could make the distinction between healthy and cancerous cells as clear as black and white.

The technique involves injecting iron nanoparticles, microscopic bits of iron, into a canine cancer patient’s bloodstream. The particles are engulfed by macrophages, white blood cells that clear blood of cellular debris, before returning to nearby lymph nodes.

About two days after injection, patients are scanned using magnetic resonance imaging (MRI). Iron appears black on this form of imaging, so if a completely healthy lymph node is full of nanoparticles, it too would appear all black. Cancer cells, though, push macrophages out of a node, so if cancer has invaded even a small portion of a node, that portion should appear white on an MRI.

“Cancer is a game of numbers and if you want to cure it, you have to get rid of 100% of the cancer cells that are in a body,” said Dr. Lynn Griffin, Assistant Professor at Colorado State University’s College of Veterinary Medicine and Biomedical Sciences. “This method could noninvasively and more accurately determine where cancer is still hiding so we can do something about it.”

Dr. Griffin plans to test the technique on up to 50 dogs with oral cancers that have the potential to metastasize to the lymph nodes. Her pilot study proved 88% accurate at detecting cancer. If it is proven successful in dogs, she said her team would like next to evaluate the use of nanoparticles in detecting the spread of feline oral squamous cell carcinoma, the most common oral cancer in cats. 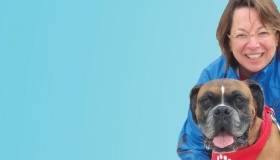