July 10, 2020 – Maintaining healthy vision as we age is as important for our furry companions as it is for us. While animals are adept at using all their senses to explore, monitor and make sense of their environment, vision is important for many of the activities our canine friends enjoy. Loss of vision can be traumatic for dogs and have a negative impact on their quality of life. Caring for a blind dog also is stressful for owners, who must take special precautions to keep their dog safe.

Many diseases can impair vision in dogs, including pigmentary uveitis, a serious cause of vision loss, discomfort and blindness in middle-aged and older golden retrievers. It’s important for golden retriever owners to learn the early signs of the disease since prompt treatment is key to slowing disease progression.

A new disease is reported

A similar disease affects Great Danes and American pit bull terriers, but is less common and hasn’t been as well described as the disease in golden retrievers.

A genetic component to the disease has long been suspected given the strong breed predisposition. Although experts still are working out some of the details on how the disease is passed from one generation to the next, pedigree analysis indicates the disease is caused by a dominant gene not linked to the sex chromosomes (meaning pigmentary uveitis is not more common in one sex over the other).

For many traits, a dominant gene would always be expressed over a recessive gene. For example, dark hair is dominant over blonde hair in people. If you inherited a gene for blond hair from one parent and a gene for dark hair from the other, you would have dark hair because that gene is dominant.

The situation is not quite as simple for pigmentary uveitis. The genetic predisposition for the disease appears to be dominant, but it has reduced penetrance, meaning the disease is not present in 100% of individuals carrying the genetic factors. This explains why the disease can affect some siblings and not others, and why it might appear to skip a generation.

Although commonly referred to as pigmentary uveitis, the disease actually is a constellation of clinical eye problems that accumulate over time and result in vision loss. One of the first signs is the development of cysts in the eye. Some cysts might be detected by an owner, but most tend to be behind the pupil and require dilating the eye and special equipment to see.

There are two types of cysts that can form in a dog’s eye: thin walled and thick walled. Thick-walled cysts tend to be solitary, round and free floating. They are not associated with  inflammation in the eye and they’re often seen in front of the pupil – many owners can spot these cysts if they look at their dog’s eyes. These cysts can be found in all breeds of dogs, including golden retrievers.

Once inflammation starts, the disease continues to progress and in approximately 50% of affected dogs glaucoma develops. Glaucoma is defined as increased pressure within the eye and can be caused by many different diseases. Untreated glaucoma is painful and almost always leads to blindness, but timely intervention can help slow progression, relieve pain and preserve vision for as long as possible.

The signs of pigmentary uveitis can be subtle at first and take a long to time to develop, which is one reason why the disease has been difficult to eliminate from the breed. Red, slightly uncomfortable eyes are early signs of the disease, but are similar to other less serious eye problems, including:

Dr. Lynne Sandmeyer, a board-certified veterinary ophthalmologist and Morris Animal Foundation grant collaborator as well as published author on pigmentary uveitis, has some guidelines she gives to her golden retriever owners when it comes to red eyes.

“Red eyes can happen for lots of reasons,” said Dr. Sandmeyer. “However, dogs with red eyes due to pigmentary uveitis tend to be a little more painful and the redness lingers longer than we would suspect with other conditions. Owners of golden retrievers should err on the side of caution and these dogs should be seen by a veterinarian sooner than other dogs.”

Unfortunately, some of the key features of pigmentary uveitis, such as cyst formation, aren’t readily visible to most owners but require special examination tools and training to detect.

Routine evaluation is key to minimizing the disease in golden retrievers

Young dogs in breeding programs typically undergo a series of examinations to make sure they’re free of any inherited conditions that could be passed to their offspring. These tests include a complete eye examination.

Unfortunately, the signs of pigmentary uveitis often begin when dogs are older and no longer in breeding programs. By then, they may have given birth to or sired several litters of pups.

Dr. Sandmeyer recommends that any golden retriever that’s been part of a breeding program should still have eye examinations done yearly.

“I would recommend that breeders who want to remain vigilant about eliminating this disease should have their breeding dogs screened yearly, even after they are retired from the breeding program,” said Dr. Sandmeyer.

Most breeders of golden retrievers are diligent about monitoring their breeding dogs for pigmentary uveitis. Other owners often don’t know about the disease and only seek care when their dogs have serious eye changes. For these owners, education about pigmentary uveitis is important as it is critical to watch their dog’s eyes carefully and not to discount even minor redness and irritation that lingers or seems to come and go over a long period of time.

Advances in genetic analysis have accelerated the discovery of genetic markers in both animals and people. Because pigmentary uveitis takes a long time to develop, it’s a disease that could benefit from a genetic test, but we don’t know that yet.

Because of the prevalence of the disease within the golden retriever population, it will be challenging to breed the disease out of existence. In addition, many inherited problems are not due to just one genetic abnormality – sometimes many genes are involved and/or there may be possible environmental influences, making the task of identifying genetic markers more difficult.

We still have a long way to go before we understand the causes of pigmentary uveitis, but the Golden Retriever Lifetime Study is designed to enable research into complex diseases like this.  Our data and samples provide a springboard for further research and discoveries that could one day help stop this terrible disease from taking our dogs’ sight. 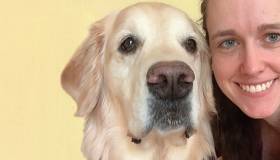 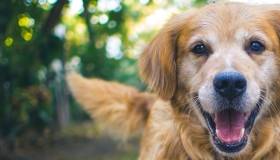