January 5, 2023 –  When Dr. Mark L. Morris Sr., an ambitious and passionate newly graduated veterinarian, arrived at his first private practice job in 1926, he began a life’s work dedicated to improving the health and well-being of animals big and small around the world. We’ll be building and sharing content – celebrating our past while looking to the future – for the next year and incorporating a special edition logo throughout our digital platforms and in our print collateral. 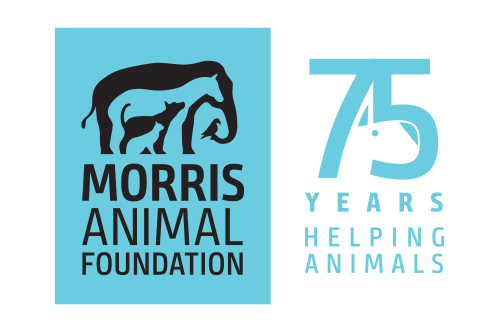 Interested in advancing veterinary medicine, Dr. Morris conducted research to improve animal health within his private practice, applying medical diagnostic and treatment protocols used in human medicine to his patients. His passion led to the construction of the Raritan Hospital for Animals in New Jersey in 1928 (one of the first exclusively small animal clinics in the United States), and the formation of the American Animal Hospital Association in 1933, a groundbreaking association committed to improving companion animal veterinary practice.

Throughout this time, the Great Depression was changing everyone’s lives. But it was Dr. Morris who ultimately realized it also was indirectly affecting the lives of pets. He was puzzled by the unusually large number of dogs with kidney disease he was treating. He was able to identify the cause of the problem: living conditions caused by the Great Depression meant that table scraps normally fed to dogs were being replaced by inexpensive canned and dry dog foods containing low-grade, meat by-products. Diets containing large quantities of poor-quality protein were causing widespread canine kidney failure.

Dr. Morris responded by creating his own dog food mix to treat kidney disease in his patients, and the formula was a great success. However, it was the fateful meeting between Dr. Morris and Morris Frank that unleashed the true potential of this landmark diet. The year was 1939. Morris Frank was the first ambassador of The Seeing Eye, one of the first organizations dedicated to providing guide dogs to the blind. Morris Frank’s guide dog, Buddy II, was ill. A veterinarian friend of Frank pointed him toward Dr. Morris who examined Buddy and determined that Buddy, like so many other dogs, was suffering from kidney disease. Dr. Morris gave Frank bags of the homemade diet he created for other dogs suffering from kidney problems. Shortly thereafter, Buddy was back to his usual self.

Pleased with Buddy’s recovery, Frank encouraged Dr. Morris to start canning his diet. His prodding eventually led to Dr. Morris partnering with Burton Hill and Hill Packing Company of Topeka, Kansas, to produce and can this formula diet, renamed k/d, on a larger scale, setting the stage for the development, testing and production of many more revolutionary prescription diets.

This venture laid the groundwork for what would become present-day Morris Animal Foundation. Originally called the Buddy Foundation, the Foundation was established in 1948, using royalties of one-half cent per can of food dedicated to support science and research as a means to advance animal health.

Over time, the original royalty program was supplanted by private giving from donors passionate about animal health. Since its creation, the Foundation has invested more than $149 million toward 2,945+ studies that have led to significant breakthroughs in diagnostics, treatments, preventives and cures benefiting companion animals, horses and wildlife globally.

Today, Morris Animal Foundation remains one of the largest and most highly respected animal health organizations in the world, a fitting legacy to the vision of Dr. Mark Morris Sr. and all those who follow in his footsteps.