November 16, 2015 – For Kristi and Chris Fiala, life just wouldn’t be complete without their golden retrievers. Like many, the Fialas got “hooked” on the breed when they got their first golden, Maggie. Since then, they’ve welcomed Jack, Gracie, Cody and Milton into the family.

Kristi and Chris also are passionate about training their pets as therapy dogs. Jack and Gracie became well-known figures beloved by the children at the Fialas’ local elementary school. The children practiced reading to the dogs and, like all golden retrievers, the dogs thrived on the attention.

Tragically, both Jack and Gracie died of hemangiosarcoma in April 2015. The Fialas were devastated. They had already lost Maggie to the disease. They couldn’t believe it had happened again. And they wanted to know why.

The Morris Animal Foundation Golden Retriever Lifetime Study was conceived as a landmark longitudinal study to find risk factors for cancer and other major diseases that have so far eluded veterinary scientists. The study designers recruited purebred golden retrievers, since they have a higher-than-average likelihood of developing cancer. Launched in 2012, the study reached full enrollment in 2015 and is already providing insights into the health of dogs.

Not surprisingly, the Fialas are part of the study. They enrolled Cody last August, and their determination to participate only increased since Jack and Gracie’s passing from hemangiosarcoma, one of the most aggressive cancers recognized in dogs.

Researchers know that lifestyle can increase cancer risk in people, and suspect similar factors are at play in dog cancers. They just don’t know what those could be.

For the study, information is collected annually on every aspect of each dog’s life, from health issues to the environment they live in. Blood and tissue sampling is done each year to monitor health and document changes. All the data gathered is being analyzed, and the results will guide the development of better strategies to help dogs avoid cancer and other diseases. To the Fialas, and dog lovers everywhere, that is reason to hope.

During our Morris Animal Foundation Season of Hope, your gift supports the Golden Retriever Lifetime Study and all of our programs that help ensure that all dogs, including Cody and Milton, and other animals will one day be able to live longer, healthier lives. And now, you can double your impact, up to $50,000, during our dollar-for-dollar match thanks to Blue Buffalo Company! 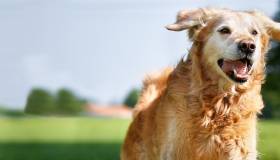 The Golden Retriever Lifetime Study Gets an Update