August 30, 2018 – This month, we celebrate six years of the Golden Retriever Lifetime Study. The most extensive investigation of its kind ever undertaken in veterinary medicine, the study is gathering information on more than 3,000 golden retrievers, throughout their lives, to identify the nutritional, environmental, lifestyle and genetic risk factors for cancer and other major diseases in dogs.

The overarching goal of the study is to identify potential risk factors that may lead to the development of four types of cancers common in golden retrievers – lymphoma and osteosarcoma, which are dramatically similar to the same cancers in humans, as well as hemangiosarcoma and mast cell tumors. But we will learn so much more.

The study began as a way to fill a major information gap. Veterinary medicine lacked the long-term, expansive prospective studies that might reveal disease correlations – why were dogs getting certain diseases and what risk factors for those diseases might be. Our scientific team decided to launch such a study, based on the structure of the Framingham Heart Study, a 70-year study that follows the residents of Framingham, Massachusetts, to identify and better understand risk factors for heart disease.

Golden retrievers were chosen for the study for several reasons, including a suspected higher risk for cancer development, genetics, and popularity of the breed (which led to easier enrollment).

The study began enrolling in 2012, looking for devoted dog owners who would be willing to commit the time and effort to document their “Hero Dogs’” lives – no small feat. Each year, dogs undergo a comprehensive veterinary exam, and biological samples such as blood, hair and nails are collected. Owners fill out detailed questionnaires, as do their veterinarians.

The study reached full enrollment in 2015, and of our 3,044 enrollees, an incredible 95 percent remain in the study and 85 percent are compliant with all study tasks. Those statistics would be unheard of in human studies and speak to the dedication of each owner. That’s almost 16,000 dog years accrued in the study (that’s actual years, not “dog years,” by the way). We estimate we will be actively collecting data and samples for approximately eight more years.

But this dedication would mean nothing if we weren’t able to share the gold mine of our findings. Recently, we’ve been able to start doing just that, such as in a paper we released in November that detailed the demographics and characteristics of our Hero Dogs, where we learned things like:

We’re also beginning to authorize research projects that take advantage of our current data to expand our knowledge about canine health. For instance, new projects will:

We look forward to sharing more information as the study rolls on, sharing what we learn with researchers, veterinarians, dog owners and animal lovers everywhere. Stay tuned for what the future holds. Until then, thank you to all our participants in the Golden Retriever Lifetime Study. Each and every one of you is incredibly important to the success of the study and are helping make a brighter world for not only golden retrievers, but all dogs around the world. 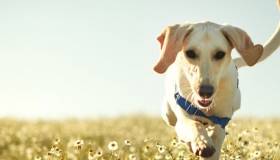